My Fender American Standard Telecaster Reviews.While Fender has released various iterations of their famed Telecaster line, the Standard American model has some upgraded features that set it apart. It is one of the favorites of recording artists, touring musicians, and guitar enthusiasts alike, and is by far one of Fender’s best-selling models since it was first introduced. This is the flagship Telecaster of Fender.

Nowadays, the American  Standard Telecaster has not only withstood the test of time but has also improved by keeping up with present technology and incorporating feedback from a wide spectrum of the guitar’s dedicated user base.

Perhaps the most noticeable difference of Fender’s Standard American Telecaster is its Ash wood body with a gloss urethane finish. There is also a model in Alder, which is standard in Fender. While still maintaining the solid and single cutaway style body of the Telecaster series, the use of Ash instead of alder gives the guitar a richer and fuller tone compared to that offered by its Alder counterparts. Newer versions of the Standard American Telecaster have an update body contour, which is supposedly more comfortable to play compared to the older versions of this particular instrument.

The neck of the Standard American Telecaster is normally manufactured using satin-finished maple, although there are models available, which contain a rosewood neck. The use of a maple neck in this guitar gives it a brighter tone. Most variants of this guitar possess a modern C-shaped neck with a rosewood fretboard containing 22 medium jumbo-sized frets with dot inlays. The use of rosewood gives the fret board a softer feel due to its more porous properties as well as providing an overall mellower sound, although models with brighter-sounding high-gloss maple fretboards are also available.

One of the major differences between the Standard American Telecaster and other models in the Telecaster line is the use of Fender’s “Custom Shop” pickups. One of the primary advantages of such technology is that they provide a clearer and arguably brighter tone compared to just utilizing regular Fender pickup systems.

The neck pickup is a Twisted single-coil Tele, while the bridge has a Vintage-style single-coil Tele. These pickups benefit largely from the no-load tone control technology featured on the Standard American Telecaster, which assists in providing the greater treble and mid-range responsiveness that is perfect for playing blues, rock and roll, pop music, and the like.

The Standard American Telecaster features chrome-finished separate tone and volume controls, which are more durable and corrosion-resistant compared to using zirconium or nickel parts. This guitar also features a three-way switch to move between pickups. It does not; however, have an active EQ feature, which it could more than makes up for with the proper amplifier settings and its highly responsive tone control.

The Standard American also features a fixed bridge with adjustable saddles, which allows users to set custom tensions for the strings to create a multitude of tonal possibilities. This type of bridge also gives the Standard American Telecaster improved resonance and sustaining capability when played. The tuning pegs are die-cast sealed for durability and to match the rest of the chrome-plated hardware featured on this version of the Telecaster. 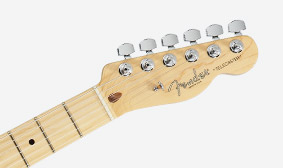 Increasing the break angle of the strings over the nut is emphasized using staggered tuners which present tuning posts of differing heights. To create a greater string angle that improves performance and helps eliminate buzz,  the D, G, B, and the high E string tuning posts are shorter which set it lower than the A and low-E strings. 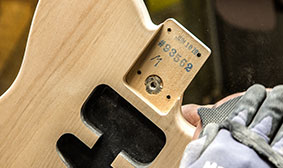 One important feature of the American Standard Telecaster is the micro-tilt adjustment which is a very cool feature if you have alignment problems of your neck. It eliminates the need for using shims on the neck.

This guitar retails at $1,250 and if you compare this to a Standard Telecaster  Made in Mexico which retails for $600, this a very good deal if you have the budget. You can get the ash body (rare), 22 frets, upgraded electronics and staggered tuners, and the micro tilt adjustment.

Being a guitar technician for a long time, and an owner of several Fenders and an advocate of modified Mexican Fenders to be used as professional instruments to be used instead of stock American Fenders, this guitar is an exception.

The main factor is the availability of Ash body and the custom shop pickups. The Mexican models have Alder only. I highly recommend you buy the Ash body with the Maple fretboard. You will get the signature bell tone and twang of the real Telecaster. I will bet my reputation on that.

Would you like to share your passion for guitars and make real money online at the same time? It is totally free and you do not need credit card information.

It is Free to Get Started.

I am Belden but friends call me Den, and I am the owner of this Website.

I have finally quit my job in Aviation as my online business is giving me financial freedom.

I love doing this online business as I love to help people quit their day job and do things they really love.

You will mostly find me hanging out at the coolest site to learn anything about online business.

guitarfretbuzz.com is a participant in the Amazon Services LLC Associates Program, an affiliate advertising program designed to provide a means for sites to earn advertising fees by advertising and linking to Amazon.com. The buyer will not pay any extra fees when purchasing through this site.